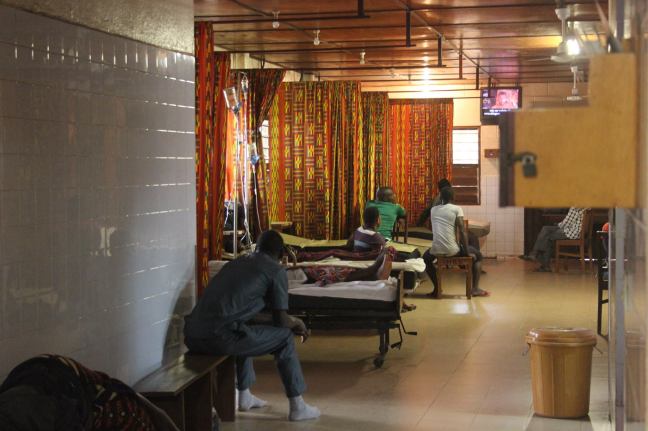 In the fall of 2019, HBB received a man with a terrible necrotizing fasciitis of his leg (this is what lay people call “flesh eating disease.” It is very, very hard to treat, and often the infected person loses their affected limb.)

When the man arrived, he was very angry/bitter. He cooperated in his physical care, but he wanted nothing to do with the chaplains who tried to share about God with him each day. Because of his infection, the man was with us over 2 months. After a time, the chaplains got “tired” of always being turned down by the man. He didn’t even want prayer for his situation while almost every-one else does, even if they are “not Christians.” In frustration, after months of being rejected and putting up with the meanness of the man, one of the chaplains gave him a Bible and said, “Look, I don’t have time to always be trying to get you to talk to me about God. There are other people who are inter-ested and need me. Here is a Bible for you, and you can read it for yourself if you want to find the truth.”

About 3 weeks later (the man was admitted for a long, long time trying to have his leg saved), the man asked for the chaplain to come and see him. When the chaplain arrived, the man was beaming, the most happy/cheerful that anyone (even his family) had ever seen him. He said immediately, “I understand now! I believe! Thank-you for sharing this Good News with me!” And then the man said that he wanted to learn more about God & Jesus. So the chaplain got him a Source of Light (SOL) Biblical correspondence course, that he could do with his Bible from his bed. The man went through the lessons like a sponge, absorbing and soaking up everything that he could.

He was finally released from the hospital in December -with his leg intact, with a newfound faith and peace, with his Bible, and with more SOL lessons. In mid-Jan, he returned for a follow up appointment. He was still extremely happy and thanking everyone for sharing Christ with him and for changing his life. After the appointment, the man was given another set of SOL lessons, and sent home. A few hours after he left, the hospital got a call, that this man had been killed in a terrible auto accident on his way back to his village!

Some people would say, “That’s not fair! That’s horrible! How could God not protect him after he gave his life to Him!” It is sad, and it was shocking, but as Christians we really should be saying, “Hallelujah! Praise the Lord! This man had an opportunity to accept Christ, before he died! God has every-thing under control and in His plan!”

This is why we’re here in Togo! To share the best medicine of all—the Good News of Jesus Christ! It is life changing and will save you in the end! Praise God from whom all blessings flow!!

The Togo South Team is an extension of